Despite a promising debut in the 1939 drama Golden Boy, William Holden’s career was fairly inauspicious until he teamed up with Billy Wilder in the 1950s. It’s a collaboration that produced the highly regarded Sunset Boulevard (1950) and the slightly less iconic but wonderful Stalag 17 (1953). There’s also Sabrina in 1954, where he’s arguably at his dreamiest.

William Holden was a popular choice for the Reel Infatuation blogathon, so I had to join in with one more post about him. And because this blogathon finally gives me a chance to talk about one of my all time favorite films and character crushes.

Stalag 17 is not my favorite Billy Wilder film. It’s my favorite Bill Holden film because it’s a Bill Holden film through and through. His performance won him the Oscar for Best Actor. The film belongs entirely to him even though he’s surrounded by colorful and hilarious supporting characters. It’s a brilliant black comedy that balances humor with the grave subject matter of life in a POW camp. Those aren’t inherently funny, but the Wilder touch is unmistakable. You need humor to survive. The comedy doesn’t lessen the impact of the bleak existence and deprivations either. It’s so well paced that it actually feels shorter than its two hour runtime.

J.J. Sefton isn’t an easy guy to love, if I’m being objective. But there’s something about him. A something that’s tied to William Holden’s own indelible appeal. I fell for them both. And while I had been impressed with Bill in previous films, what with his seemingly effortless talent and good looks, Stalag 17 made me seek out more of his films. It made me realize that this guy was something special. (He’d be the first one to disabuse me of any such notion, but oh well).

“Sergeant J.J. Sefton. I guess it’s about time I told you a few more things about that Sefton guy. If I was anything of a writer, I’d send it into the Readers Digest for one of those ‘most unforgettable characters you’ve ever met’.”

This isn’t Readers Digest, but I’m going to do the very same.

Or perhaps it’s more appropriate to use the German translation of my love: meine geliebte. After all, J.J. Sefton is a POW in a German prison camp, somewhere on the Danube. He’s in a compound with American airmen just like him. But that’s where the similarities end between he and his fellow prisoners/sergeants.

As our narrator Cookie (Gil Stratton) informs us, it’s a week before Christmas, 1944. On this particular night, two men, Manfredi and Johnson, are planning to escape. The night is heavy with darkness and the guards patrolling, the searchlights flooding the compound with blinding white light. The prisoners in barracks 4 are awake in their bunks as the light illuminates each of their impassive faces.

And then the camera lingers on one guy with a cigar perched in his mouth. 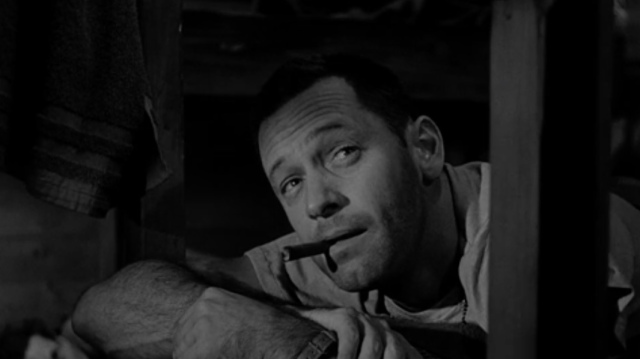 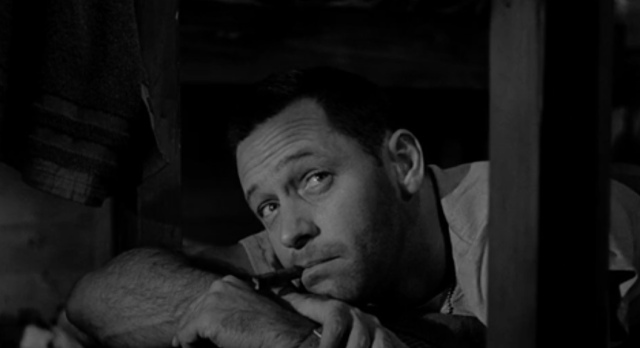 Before we learn his name or anything about him, we know what kind of guy he is: cynical, callous, and opportunistic. Uh, meine geliebte? You see, Manfredi and Johnson have just slipped out of the barracks. Everyone believes they’re on the way to freedom. Everyone except our friend, Sefton, here. He wagers that Manfredi and Johnson won’t even make it to the forest. No one takes very kindly to that, but they bet their cigarettes just to challenge Sefton’s smug, all knowing attitude.

And then, machine gun fire erupts, though at least one guy holds out futile hope that Manfredi and Johnson weren’t caught in that spray of bullets. Maybe they did survive. Sefton looks pretty downcast himself even as he collects his winnings. Hey, maybe this guy has a heart after all.

“I just liked the odds,” he tells them later.

Sefton is callous and cynical, but he’s also a hard nosed pragmatist. Cynicism is sometimes lazy and cheap, but it’s also borne out of frustrated idealism. So he’s cynical. He’s also a prisoner of war. We can’t – and shouldn’t – dismiss Sefton right away. He’s fought in the war, been captured by Nazis, and doesn’t have a rosy view of life or escaping stalag 17. Cynical, sure, but hard earned. Better to sweat it out here.

Now there’s something else. Cookie has also informed us that during the Christmas of ’44, they found a traitor in their midst. And then there’s Sefton betting on those two lives. And the other guys are more than a little suspicious about how confident he was that Manfredi and Johnson wouldn’t make it. Meine geliebte?!

I didn’t love J.J. Sefton immediately. My curiosity was piqued, but I had to get to know him better. That was a delight.

Cookie, Sefton’s only friend and his lackey, obviously admires the guy. He’s the one who wants to send the story to Reader’s Digest. He explains that Sefton is a hustler, always scrounging for something. 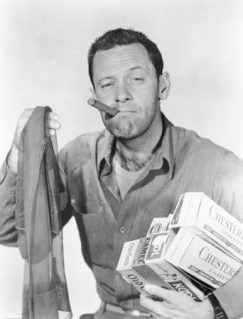 He runs a “horse race” and takes bets. The horses are actually mice. But it’s quick entertainment in the cramped barracks for men who have no comfort or luxuries. It’s a definitely a stretch to claim Sefton does any of this out of altruistic motives; he’s only in it for self gain. Still, it’s something.

He has a distillery for alcohol that’s unpleasant and painful to drink. “What are you trying to do, embalm us while we’re still alive?” But all Sefton can guarantee is that they won’t go blind. Real upstanding, this guy.

He charges admission for the men to spy through a telescope at the female Russian prisoners in the opposite compound. It’s even more perverted than it sounds. Men and their libidos or whatever.

And most egregious of all is Sefton’s relationship with the German guards. He can trade things for privileges, usually from what he’s won from the other prisoners. Does that make you uncomfortable? An American being chummy with his Nazi captors? It angers the other guys. Makes their suspicions flare up even more.

“Me, I’m staying put. I’m gonna make myself as comfortable as I can. And if it takes a little trading with the enemy to get me some food or a better mattress, then it’s ok by Sefton.”

I’m not mad at it. He does have a point, even if it doesn’t make him particularly endearing. Consider the way he cooks an egg, an actual egg, as the others look on, hungry and envious. Two of them, Harry and Animal, watch him reverently and ask if they can keep the shells. And Sefton, generous guy that he is, lets them. We should hate him. And yet, Sefton and I both have to wonder if maybe the others resent him because they’re not as cunning or resourceful as he is.

But his special privileges lead to trouble. After one of the prisoners is taken in for questioning, all of the blame lands on Sefton. They become convinced that he is the stoolie. Their proof? He was granted permission to visit the women’s barracks. By their reasoning, that was his reward for snitching this time. Sefton doesn’t get a fair trial of course. They pounce on him and it’s horrible. Thankfully we don’t see him getting mercilessly pummeled, after the first few seconds that is. My eyes actually well up in that scene. I can’t really explain it. I’m supposed to hate him, aren’t I? But I just know he’s innocent. And he sets out to prove his innocence. He notices crucial things the others don’t. His ingenuity isn’t limited to securing his comfort in the barracks. It also helps him smoke out the real traitor. Am I supposed to hate him?

William Holden didn’t want this role initially. Billy Wilder refused to trim Sefton’s unsympathetic nature, ignoring his star’s objections. And it all works. Because for me, this guy is still likable and charismatic. It’s the same charisma Bill Holden was able to tap into when he played a cynical POW again four years later in The Bridge on the River Kwai.

Wilder originally wanted Charlton Heston to play Sefton (impossible), but decided against him because he was too honorable. Bill Holden’s honor was dormant; it just had to be prodded awake. Gritty, reluctant, but still there. Some men have to wear their honor proudly on their chest. Not Bill. That’s why Sefton is the embodiment of the anti-hero.

I loved contributing to this blogathon and reading all the other entries as well. There’s still plenty of reel crush stories to go around! Check out more of them here.