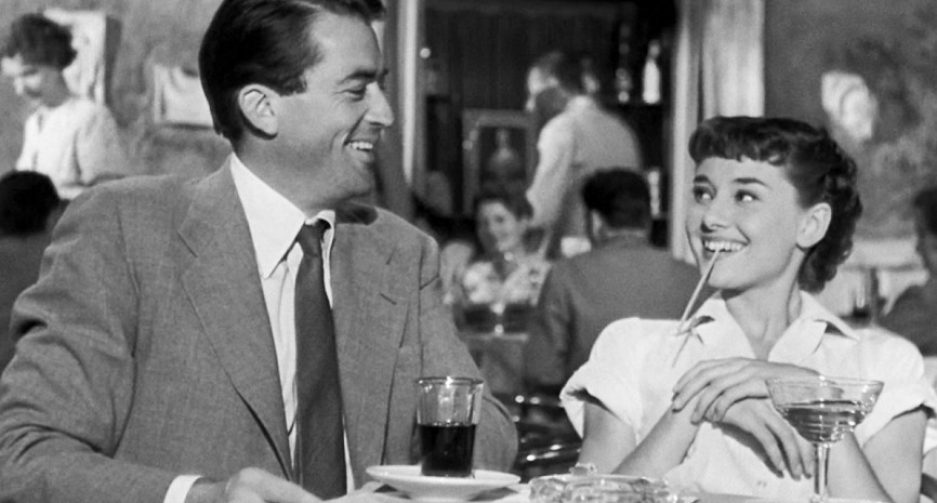 A couple of months ago, I rewatched one of my favorite movies, The Petrified Forest. I’ve always wanted to write about it. This is my attempt to capture what I find so extraordinary about it.

Originally a stage play, the film feels and looks like it. The action takes place in a diner on the “edge of nowhere,” in the desert of Arizona. It’s the type of place where nothing ever happens, until a notorious gangster shows up and holds the few people huddled in the diner hostage. It’s a romance/crime drama tinged with existential musings.

The film stars Leslie Howard and Humphrey Bogart who both appeared in the play. Warner Brothers wanted to offer the role of the gangster Duke Mantee to Edward G. Robinson, but Howard insisted on Bogart. The latter would name his daughter Leslie years later in gratitude, as The Petrified Forest kickstarted his film career.

Howard plays Alan Squier, a failed writer drifting along when he happens on the diner. He meets the waitress, an adorable blonde named Gabrielle (Bette Davis). The diner is owned and managed by Gaby’s grandfather and father. Her mother left when she was only a baby and lives in France. Gaby maintains a correspondence with her mother and yearns to join her in France one day, a much more glamorous and stimulating place than her current residence. In Alan she finds someone she can really talk to. In contrast to Boze, a beefy gas station attendant at the diner who has feelings for her that she’s reluctant to accept, Alan is a spindly intellectual with fair features.

This was the second film Davis and Howard co-starred in. Of Human Bondage in 1934 earned her the first of many Oscar nominations, and saw her as the cruel waitress who ruins Howard’s life. It’s Love I’m After (1937) is a frothy romantic comedy, but their romance is still just as sharp as the former film’s. Here, in The Petrified Forest, they’re much more tender, and on equal footing.

Gaby longs to see the same world Alan has, but he longs for the desert she’s most desperate to leave. Before the arrival of Duke Mantee, this could’ve been a wistful romance between two kindred souls. Death adds another dimension.

Humphrey Bogart plays Mantee with a sort of edgy menace. His face is etched in a permanent scowl, but his emotions are steady. That gaze is so dark, the grimace so hard. There’s a ferocity just beneath the surface.

Mantee and his associates use guns to keep everyone in line. But Alan is strangely unaffected by fear. He strikes up a conversation with Mantee, making observations about the gangster and the world around them all.

Alan actually admires Duke. He calls him the “last great apostle of rugged individualism.” This film has been described as brute force colliding with intellect. On the surface, the two men seem diametrically opposed, from their appearance to their behavior. And what would someone like Alan find to admire in Duke Mantee? The former is sensitive, with great appreciation for poetry and art. The latter is, well, a brute. But they do represent two American male archetypes. The gangster/crime boss has been immortalized in film many times over. Our most uniquely American heroes and stories are filled with violence and brute force.

Alan recognizes that in Duke. Gaby’s grandfather admires Duke too, and excitedly recalls his famous encounter with Billy the Kid. Duke has brought excitement to this forgotten place.

And then Alan makes a very strange request. He asks Duke to kill him. He isn’t suicidal or in any sort of distress. But he wants to die. And the reason he wants to is love. Love for Gaby makes him want to end his life rather than spend it with her. He draws up his insurance policy, intending to give it to her so she can travel to France and live the life she’s longed for. This is how Alan is similar to Duke: he chooses death on his own terms. He won’t ever achieve Duke’s glory, but maybe by sacrificing himself, he can forever be preserved as a tragic, romantic hero. He also senses greatness in Gaby, whereas he’s squandered his own. It’s much easier to die when you have no further expectations for your life.

I wonder about how different this story would be if both lovers had survived. If Alan’s will to live and conquer had indeed been restored. Would it lose its potency? Towards the end, there’s a shootout. For the majority of it, the audience only hears the volley of gunfire, while the camera pans to each of the hostages. It’s such a remarkable sequence. And it contains one of the greatest bits of dialogue.

“Paris…that must be the most marvelous place in the world for love, isn’t it Alan?”

“All places are marvelous, Gabrielle.”

Love is the force much stronger than death, but death won out this time. Or was love triumphant after all? That’s the only way to meet death with courage.