It wasn’t until I watched Ratatouille that I realized cuisine could be artistic. I take it for granted that food usually looks just as good as it tastes. Bowls and plates are like canvases, with an arrangement of colors and patterns offering up rich aromas. Remy in Ratatouille is not only a chef, but an artist. No wonder it’s called the culinary arts!

Ratatouille isn’t the only animated film to make food look appetizing and beautiful. Studio Ghibli is famous for it. The studio’s hand drawn features boast some truly exquisite scenes rendered with warmth. Meals in Ghibli films are lingered over, enough to make you hungry.

I don’t really have comfort foods, but I have Ghibli movies.

Ponyo is one Ghibli film that’s just as comforting as a hot plate of food. It’s a retelling of The Little Mermaid, but without any of the tragedy. Our eponymous heroine is a fish who wants to be a little girl on land. Her father is a wizard who hates humans for how they’ve poisoned the ocean, and he wants her to remain a fish. But Ponyo is too headstrong. A little boy named Sosuke rescues her from a bottle that washes up on the beach, and the two become fast friends. Theirs is a love story; innocent and pure between five year olds.

While she’s a fish, Ponyo gets a taste of ham and she loves it. 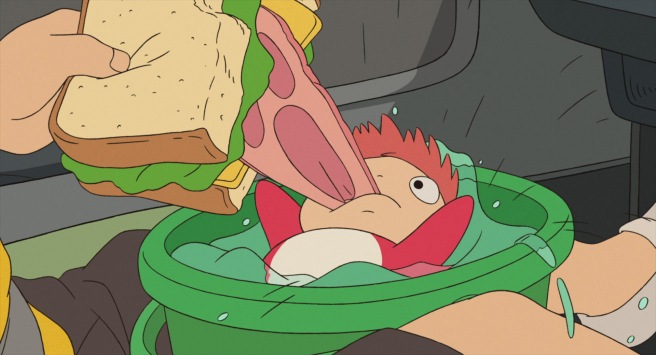 The next time Ponyo eats ham, she’s a little girl, and is wildly excited about it. Lisa, Sosuke’s mom, prepares it for them both with steamed noodles. I honestly can’t even watch this scene without eating something myself. I should learn to cook so I can make my own ham and noodles, really.

Ponyo is so enthusiastic that she eats with her hands first, and yelps because of how hot it is. The food looks delicious, but the way its served is really lovely too. And this is a great scene just for the way Ponyo’s anticipation builds up. I also love it because these two precious kids fill up their tummies with tasty food. And it’s just one lovely little scene in a film that’s immeasurably lovely and soothing.

Ponyo is perfect for any day, one of those movies that makes you forget the world and fills you up with nothing but sweetness and joy. Your stomach won’t be full, but your heart will be.

I wrote this post for the Food in Film blogathon. Click the banner below to see what everyone else has served up!

6 thoughts on “The Art of Food”